Is religion at war with science in modern Nigeria? 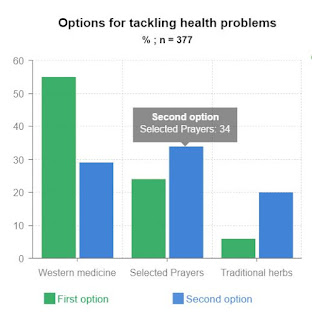 Eighty eight percent of Nigerians, from the findings of a World Values Survey, agree with the statement ‘whenever science and religion conflict, religion is always right’. This conflict was evident in the actions of religious leaders and followers. During a nationwide polio vaccination campaign, some religious leaders claimed that preventing the disease is against the teachings of Islam while others called for its boycott arguing it had been contaminated as part of a conspiracy to reduce the population of Muslims. Both actions led to a boycott of the vaccine with grave consequences. Also, the Ebola virus disease was described as an ‘evil spirit’, a view widely held in Africa. These interventions indicate a conflict between religious and scientific ideas. But is this the norm?

Our findings were interesting and surprising. 82% of respondents who agree that ‘Father’s gene decides sex of child’ also agree that ‘God decides sex of the child’. When asked their ‘First option for tackling health problems’, 55% of respondents selected western medicine, 24% prayers and 6% traditional herbs. On the ‘Second option for tackling health problems’, 34% selected prayers, 29% western medicine and 20% traditional herbs. Only 12% chose western medicine as first and second options. These indicate that the respondents look to both science and religion for explanations about their world and wellbeing.

We also found that religious engagement is much larger than scientific engagement as less than 20% attend science activities or sponsor science events compared with 91% who attend religious activities and the 75% who donate to religious causes.

Findings also surprisingly show Nigerians have same levels of trust in scientists and religious leaders. Evaluative attitudes were grouped into ‘progress’, ‘fear’ and a ‘mythical image’. Progress denotes positive experiences such as ‘Benefits are greater than harm’ while fear brings together expressions of worry and concern as in ‘The more I know about science the more worried I am’. The myth perspective recalls an idealist image of science as in ‘Science and technology can sort out any problem’.

At present, the relationship between science and expectations of ‘progress’ varies with levels of religiosity. For the non-religious, more knowledge makes for greater optimism and for the very strong believers, knowledge makes no difference. For the moderates, however, as their knowledge increases, they become less optimistic. Knowledge is also important for the moderates in the ‘fear’ group as it decreases at high knowledge but it makes no difference to the weak or very strong believers.

The research shows that conflict is not the norm but coexistence with levels of knowledge, religiosity and evaluative attitudes playing strong roles. The interviewees further clarified this coexistence and its different forms.

Some believe it can be empowering, as the internet has increased access to religious books, sermons, etc. or parallel, ‘… well if you indulge in unprotected sex and you think God will prevent you (from diseases) … the answer is no…’.

It can also be hierarchical where science comes before religion, ‘… I rate prayer as 40% … for me to protect myself from a particular disease like HIV… I make use of the protection that science has offered…’ or the reverse, where religion is supreme, ‘… as a Christian … if I don’t have faith in God, if I take thousands of Panadol (analgesic) then it won’t work’.

The relationship can likewise depend on the strength of the individual’s faith in science or religion, ‘We’ve seen instances whereby some people will say no, I can’t use drugs … (and) ... you see, some people, until they get injection, even if it is ordinary water that is in the syringe…’.

For one of the participants, the relationship creates a paradox, ‘Science gave us a different evolution and there is also an evolution in the Bible but, she emphasises, ‘God doesn’t teach us to be foolish?

Read the full paper 'I have faith in science and God’: Common sense, Cognitive polyphasia and attitudes to science in Nigeria by Bankole A. Falade, Martin W. Bauer 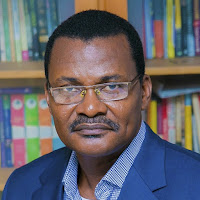 Bankole Falade is a Visiting Fellow at the Department of Psychological and Behavioural Sciences, London School of Economics and Political Science. He is interested in science communication, public engagement with science and religion and representations of health and illness in Africa. You’re warmly welcome to connect, have a look at his research output and follow his science-in-the-media tweets.