A bread roll, lettuce, sliced tomatoes and 150 grams of a juicy burger. The atmosphere on the 5th August 2013, with food critics and chefs gathered in west London, is very different from the relaxed, cheerful mood of a barbecue with friends. Josh Schonwald, an American journalist, and Hanni Rützler, an Austrian researcher, are about to taste the first burger from bovine stem cells invented by the scientist Mark Post, who is waiting in trepidation. Then, the verdict comes: Hanni Rützler commented "It's close to meat. It's not that juicy. The consistency is perfect … (but) it’s missing salt and pepper!"


This short story has all the elements and actors defining the relationship between food, science, technology, and society: scientists, entrepreneurs, research institutes, governments, lay public and the media. 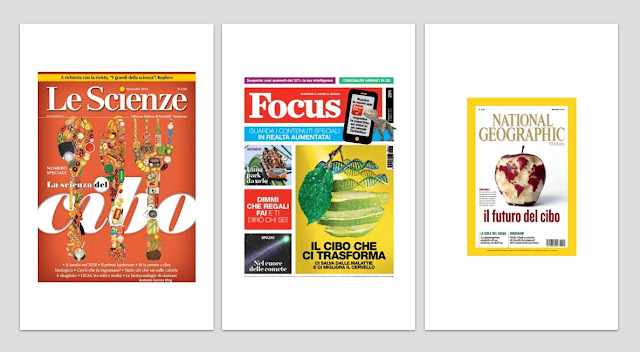 Scientists and biotechnologists have been working in the food industry for many years to develop animal-free eggs, to reach the production of a vegetable cheese and to produce plant-based meat. At the same time, food and eating issues have become more and more relevant not only to science and technology but also in the media agenda due to the intersection with several social aspects.

To understand how the use of food issues has become a public resource within the public sphere, I investigated how the topic of food and eating – in a technoscientific frame - has been structured within the media. For this reason, I analyzed and compared food and eating-related articles published on three of the most popular Italian newspapers ("Corriere Della Sera", "La Repubblica" and "La Stampa") and three of the most popular Italian scientific magazines ("Focus", "National Geographic Italia" and "Le Scienze"), between 1 January 2010 and 31 December 2016.
The non-specialized media perform an extremely complex role particularly in the communication of science. A role that in certain circumstances may act as a “filter” and an “arena” for different actors.

One of the most important aspects to understand the public attitude about food innovations is the communication process to reach the audience. Popular scientific magazines are one of the most important ways of spreading reliable and "unofficial" technoscience information to a broad public. In fact, these publications are important to connect both with science enthusiasts, and the general consumers.

I conducted a quantitative analysis to verify the degree of coverage that the media reserved to the food issue during the considered period, and a qualitative analysis to identify emerging themes in the public sphere. I used a topic detection procedure to investigate how newspapers and magazines talk about food and eating. 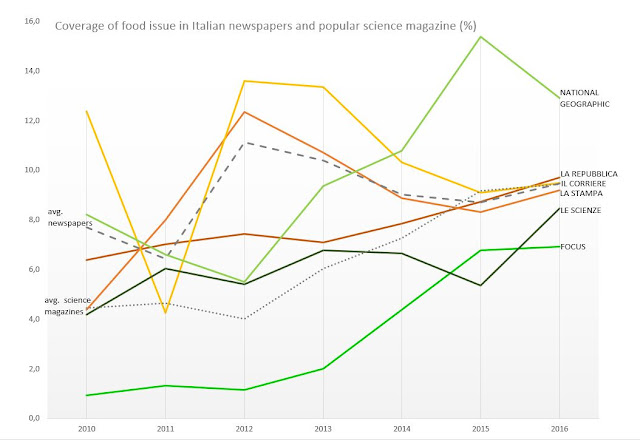 Then, I focused on the importance of the food theme within 49,351 newspaper articles published between 2010 and 2016 that had a content significantly related to technoscience. The 13,7% of these articles dealt with the theme of nutrition. In the same period, popular scientific magazines published 2,070 articles concerning food and eating (5.7% of the total of published articles).

The analysis showed that there are some characteristics and trends in the Italian newspapers and popular scientific magazines that can provide useful indications on how the media process food and eating. In particular, comparing the different newspapers and magazines, it was possible to detect:
However, the most relevant result is that the food-related articles are increasing over time and more and more relate to biomedical issues.
Health is a recurring interpretative frame in both newspapers and popular science magazines articles, confirming the trend of biomedicine as a media emblem of technoscience.

This study can't explain how the nutrition theme and science, especially biomedicine, are linked. It is not clear whether food is a flexible topic that can meet news values or if biomedicine reaches lay publics through food news.
Further studies are required to find an answer to this issue as this explorative research cannot provide exhaustive results and needs further investigation as the relationship between food and society - and even more between food, media, science, and society - is a complex issue.

Andrea Rubin graduated in Sociology at the University of Padua with a thesis in the sociology of science. Currently, he is a Ph.D. candidate in Sociology, organization, and cultures at the Catholic University of Milan. His Ph.D. studies are focused on the social representation of food and science in the media.  He attended a Post-Graduate Course in Science Communication at International School in Advanced Studies (SISSA) of Trieste. For his final thesis, he won the “best thesis award in memory of Franco Lutman – 2017 edition.
His research interests are science and technology studies, public perception and public communication of science, citizens engagement in the governance of science and innovation. He collaborated with Observa – Science in Society (Italy) and regularly write for local magazines and for popular science journals.