Do You Know Your Audience? The Four Audiences of Science Communication in Switzerland

We found four groups regarding people’s attitudes towards science in Switzerland. The groups also substantially differ in their media use.

As in many other countries, science enjoys a large amount of interest and public acceptance in Switzerland. While interesting, such overall findings for a population of more than eight million citizens are hardly useful for any science communication efforts. We constructed different subgroups within the Swiss population regarding people’s attitudes towards science and research. This resulted in four distinct types, ranging from science-enthusiasts to those more disengaged. 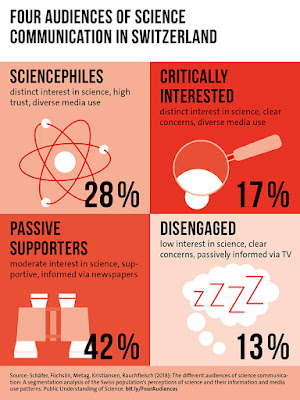 In our study, we focused on people’s attitudes towards science and research to identify the main differences within the Swiss population. After analysing twenty such attitudes measured by the «Science Barometer Switzerland», we reconstructed four different types representing four different audiences of science communication in Switzerland:

The four audiences were identified by analysing people’s attitudes. Yet, we find just as many differences when looking at their media use further. For example, the two groups with a high interest in science – the «Sciencephiles» and the «Critically Interested» – come into contact with science and research through a variety of sources: in descending order, the internet, newspapers, television and the radio all come into play. This is not at all the case for the «Disengaged»: if it were not for incidental contact through public television and radio broadcasting, they would barely have any contact with science.

The four audiences of science communication present a useful basis on which to design approaches to science communication in Switzerland. Besides the results presented here, many more details can be found in the academic article. However, the question remains whether other countries can use these audience types.

We would argue that this is possible if the country in question has structures similar to Switzerland. So if general support for science is known to be high and education and research enjoys a prioritised role in the government's budget, our typology is worth considering. Beyond that, many other countries have the data to run similar analyses and provide more suitable insights for domestic science communicators. We hope that our analysis encourages them to do so. 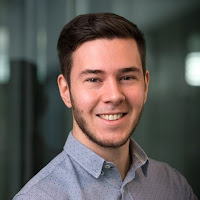 Tobias Füchslin is a Research and Teaching Associate at the University of Zurich’s Department ofCommunication and Media Research (IKMZ). His research focuses on science communication, scientific and digital literacies and information seeking.
Follow @tofu89