How many people might participate in citizen science – and which groups could be targeted?

Citizen science projects invite people to become “citizen scientists” and contribute to scientific research. This contribution can range from classifying galaxies online and collecting plant specimens out-side all the way to initiating and running community-based research projects together with scientists. Citizen science not only enables researchers to realise large-scale projects, but also invites the public to learn more about the scientific process and develop an informed opinion about science’s role in society  It is not surprising that the academic world is hoping for an expansion of this inclusive scientific approach.

Unfortunately, hopes and reality do not always match. Citizen science seems to suffer from “participation inequality”. While citizen science has the potential to include diverse publics in scientific knowledge production, studies have shown that citizen scientists are predominantly white, male, highly educated, and highly interested in science.

There are numerous reasons that could explain this one-sided makeup of participants. Our study tried to analyse the phenomenon at its root and analyse who was interested in participating in citizen science in the first place. In other words, we focused on the potential pool of participants in Switzerland and unpacked the whole nation’s general interest in participating in scientific research projects. We used representative data from the Science Barometer Switzerland to divide the Swiss population into six groups – five interested in participating, one not so much. Three key insights emerge from our analysis:

High interest in participating in Citizen Science projects in Switzerland

As you can see at the bottom-right rectangle in our infographic, about 64% of the Swiss population are not interested in actively contributing to research projects. Nonetheless, this also means that 36% are in the pool of potential citizen scientists – an encouraging amount of people. We know from the science barometer’s partner project in Germany that this number is similar in Germany (30%) and we suspect that many other countries might be surprised about their population’s basic interest in participating in research projects.

Strikingly, there are no gender or education differences in interest in citizen science. Already having a high interest in science, however, seems to be a likely prerequisite.

The graphic shows that all five groups interested in participating also feature a heightened interest and trust in science. People’s education and gender, however, are more evenly distributed. While men are in the majority in four groups, women dominate the largest target group, the “Free-Timers”, representing 11% of the Swiss population. Women and men, highly or not so highly educated people are equally willing to participate in a research project. Project organisers should not, however, expect to easily recruit people with more negative attitudes towards science. 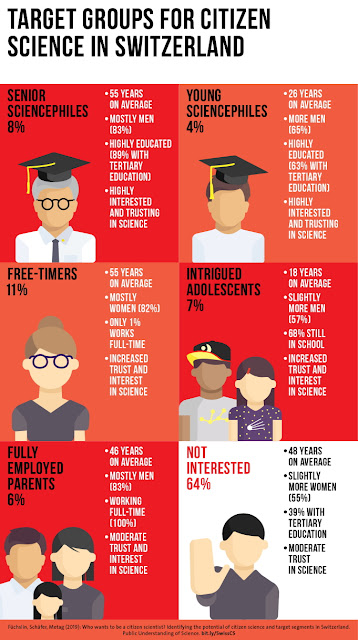 Our results demonstrate that citizen science can recruit more diverse groups in Switzerland – and in other countries, likely, too. But to do so, it is important that project organisers do not overlook certain sociodemographic groups in their recruitment efforts. While we mostly see highly educated men participating in citizen science, there are far more diverse target groups ready to be convinced to participate in future projects.

We do not know yet how much time and effort these people would be willing to invest. Our full study provides additional data on how researchers can reach and address these Swiss target groups in terms of communication channels. It will be interesting to see to which extent our findings can be reproduced in other countries and how they will change over time. Future research can certainly explore these and other aspects, potentially even by harnessing the power of citizen science.