Science for Good? The Effects of Education and National Context on Perceptions of Science

July 31, 2019
Science is under attack in some quarters. Vaccine and climate change skeptics, for example, argue that scientists misrepresent the threat posed by particular technologies. Others question whether science does more harm than good, altogether. One of the most common beliefs about anti-science attitudes is that they reflect ignorance or inexperience with science.


The assumption is that increasing exposure to science through education and outreach is the key to reducing skepticism of public science and opposition to public policy informed by science. Indeed, surveys in the United States and the United Kingdom consistently find evidence of a link between education and science appreciation. However, there is much less research on science attitudes in non-Western countries and we wanted to know whether the link between education and appreciation of science is universal or whether it depends on the country.
Researchers disagree about why education is associated with more favorable views of science, and we hoped that investigating this relationship on a global scale could provide new insight on the underlying connection between education and science attitudes.

We used representative survey data from 76,858 individuals in 41 countries from the International Social Survey Program and World Development Indicators to examine how people weigh the potential good and harm caused by modern science. We found quite a bit of variation across and within countries. 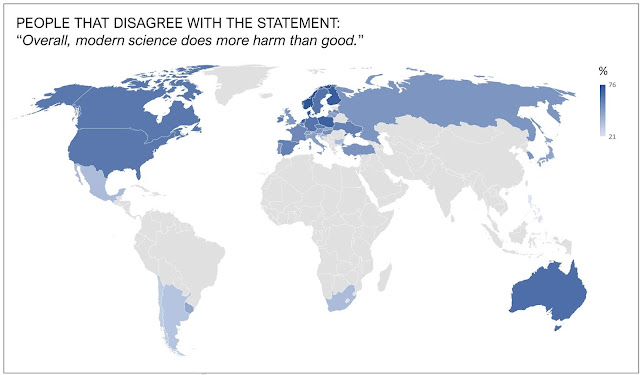 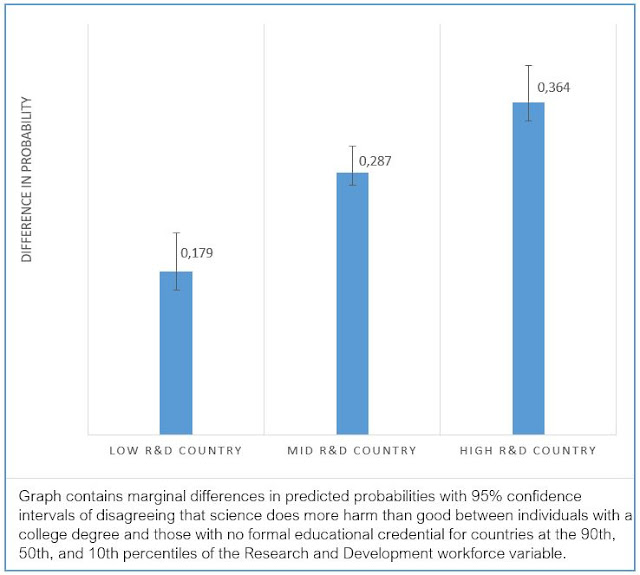 What explains these country differences in how education translates into science attitudes? We believe that it reflects different value orientations of societies with large and small investments in science and technology. Specifically, societies’ with large scientific workforces emphasize modern values such as rationality and individualism. In these contexts, personal experiences and identities are central in the formation of social attitudes. In societies where these modern values are less prominent, personal experiences with education is less important to social attitudes. Overall, education is associated with more positive views of science worldwide, but the effect is strongest in places where organized science is most prominent.

Importantly, these results suggest that efforts to increase exposure to science will meet different levels of success depending on country context. In sum, as science communicators, educators, and others consider ways to improve public perceptions of science, their strategies must account for the individual-level identities and experiences that shape how people think about science as well as the cultural contexts where these beliefs are formed.

Read the full article on Public Understanding of Science

Shiri Noy is an assistant professor of sociology at Denison University.
Her research interests are in globalization, development, and health in Latin America, public perspectives on science and religion, and comparative methods.

Timothy L. O'Brien is an associate professor of sociology at the University of Wisconsin-Milwaukee. His research focuses on the cultural authority of science and the role scientists play in politics, law, and everyday life.