New Voices: Communication for Diversity and Public Engagement in Sciences, Engineering, and Medicine 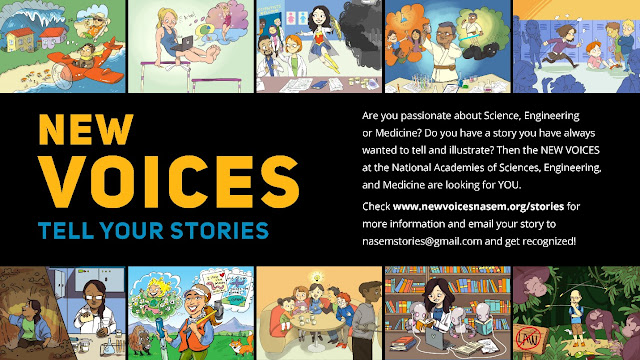 Science shapes our world, but scientific understanding may often seem out of reach to those without a scientific background. We now know that people are more likely to engage with science when they share a cultural background with the messenger - the scientist - yet 81% of Americans cannot name a living scientist, let alone identify a scientist that looks like them.
In 2018, the National Academies of Sciences, Engineering, and Medicine (NASEM) launched an initiative designed to bring diverse perspectives from early-career U.S. leaders to important dialogues around how science, engineering, and medicine are shaping the future.

An initial cohort of 18 professionals - New Voices’ in Sciences, Engineering, and Medicine - was asked to provide new perspectives on globally important scientific issues, to improve the communication of scientific understanding, and to advocate for innovative strategies to expand the diversity of the scientific workforce.  To achieve the communications goals of the New Voices group, the inaugural class is pursuing ideas and strategies that promote:

We at New Voices believe that personal storytelling can inspire a new generation of science advocates; this belief is underscored by the wide popularity of science-themed movies, books, and podcasts. Additionally, it has been documented that personal storytelling makes scientists better communicators. Although efforts in personal storytelling in SEM are growing in outreach and accessibility, there is currently no central digital publishing platform for sharing stories and nurturing creative inspiration in SEM professionals. Building on the success of efforts such as Story Collider, Growing up in Science, and 500 Women Scientists, we believe that a more centralized and accessible storytelling facility could inspire young SEM professionals nationwide, and across the globe, to share their personal stories on who they are and why they are passionate about SEM.

To develop a centralized creative space, New Voices are piloting scalable projects to humanize scientists and science through illustrated stories about personal interests and inspiration, as well as obstacles overcome. Our goal is to capture scientific origin stories, as well as the failures and insightful twists that led to the success of SEM professionals; these are stories that cannot be found on official resumes but that encourage a new and diverse generation of scientists by sharing common insecurities from one human to another.

If successful, such an effort can create a more scientifically-fluent population to fight the current trend of scientific disinformation and prepare the world to confront the challenges of the future.
Such stories can also lead to the promotion of diversity in SEM and build engagement and trust with the public and media. This initiative can increase the number of Americans who can name a living scientist and drive home the universal message that scientists, engineers, and doctors are integral members of our families, our neighborhoods, and our societies.

In 2018, New Voices piloted an ambitious storytelling effort, beginning with its own members. To date, the New Voices have collected twelve stories from various SEM disciplines.
These stories have been illustrated with the help of a professional artist to make the central messages relatable and inspirational; these inspiring, colorful messages can be found at the New Voices website.
An example story on the current President of The Federation of American Scientists, Dr. Ali Nouri, is shown with an illustration below. 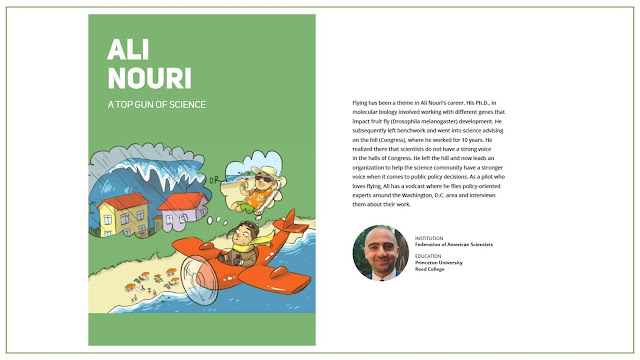 The first rule of storytelling is to know your audience.


While we feel that the stories of SEM professionals are universally inspiring, we have chosen children of diverse backgrounds as the primary audience for these illustrated stories. We envision our audience as school kids who are just being introduced to the wonders of SEM, or who may have seen pictures of scientists with white lab coats and white hair and thought ‘that’s not for me’. Using cartoons to illustrate the common humanity, personal struggles, and insightful twists that led diverse individuals to SEM careers, the New Voices hope to inspire these children to harness the powers of SEM in their own lives.

A secondary, but equally important, audience is the general public. These colorful, illustrated stories can capture public interest, and inspire trust in and engagement with scientists, engineers, and doctors.

Initial Response to the Stories from the Pilot

Overall, piloted stories have been well received by many audiences.  Each story highlights the natural curiosity of childhood, or a dream that the storyteller aspires to, or a problem that needs to be solved, or highlights the tenacity required to overcome obstacles that may be in the way.  Educators at the K-12 level have found them useful to highlight multiple aspects of science careers and encourage students to look beyond the stereotypical laboratory worker.  The stories have also been a great tool to highlight the richness of diversity in science and scientists, by highlighting scholars from various backgrounds and expertise. Some of the scientists pictured in these stories are also using the illustrations to promote their research and increase outreach in their respective communities. A publisher has even approached New Voices with a proposal for an illustrated children’s book titled “The Secret Lives of Scientists, Engineers, and Doctors.”

Many in leadership positions at Federal Agencies found the sample of stories motivational enough to consider replicating the effort for their own organization and its employees. For example, leadership at NASA expressed interest in exploring similar personal stories on the agency-funded principal investigators (personal communication).  A similar response was also received by academic institutions (for example at University of Washington) where profiling the unofficial and personal stories of faculty in SEM was felt to be an effective student recruitment and retention strategy.

We all have an origin story. This is true whether you are a mother who explores the Alaskan tundra, a gymnast who studies the way our body moves, or a Latina Super Woman who improves our understanding of the effects of air pollution on boys and girls. These stories matter because they give us a glimpse into the ‘real person’ behind the white lab coats and safety glasses, and our shared challenges and successes can inspire a new generation of scientific superhero!

Given the initial success of the piloting of the personal storytelling initiative, the New Voices have now launched a simple and scalable international beta-testing effort. The current plan is to send out a solicitation message on social media and various communication platforms used by professional SEM societies titled “New Voices: Tell Your Stories” as follows: 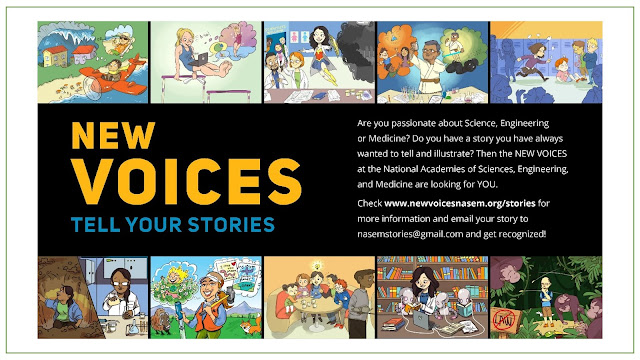 Our goal is to solicit stories from across the country and the world, specifically targeting underrepresented groups and locations through our growing networks.
To facilitate the process of gathering stories, the New Voices have also laid out a simple and clear plan on the submission process and the specific products that will be developed using the selected stories. 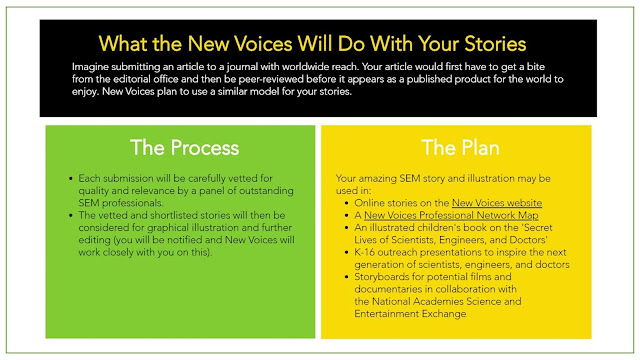 We would love to hear the stories of scientists and engineers interested in Earth and Space -- please send your stories for possible illustration (for details see the posters above). We hope to report on the response and the stories we receive from coast-to-coast and across the world in a future update.


Join us.
Tell us your story and inspire a new generation of scientists, engineers, and doctors.
http://www.nationalacademies.org/newvoices/