Brian Trench delivered a guest lecture entitled "Images in the social conversation of science on occasion of the official inauguration of the Master in Communication of Science, in Trento on October 2nd, 2019. 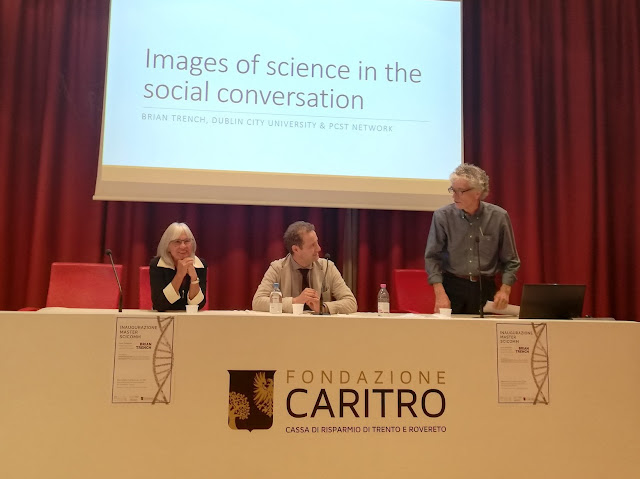 In his talk, Trench addressed the issue of how images related to science are created by lay people, and how they are externalized and shared in society.
The way science is represented in the collective imagination is often prone to stereotypes. An example of this, as straightforward as illuminating, was triggered by Trench's request to the audience to mentally depict a scientist. It turned out that the most popular image was the by now trite portrait of Albert Einstein. Few attendants represented the scientist as an ordinary person. Even fewer, as a woman -- still quite a long way to go in this respect.
Rigorous assessments of the images of science people have in their mind conducted in more formalized settings, such as focus groups, have been proved to provide analogous results. The most prominent representation of scientists is that of extraordinary people, sometimes described as so exceptional to approximate science fiction characters, even by professional scientists themselves.

This idealized image of scientists, and of science as a whole, has been theoretically formalized by Robert Merton in 1942. In his description of the norms regulating science, Merton conveys the idea of science as a benign activity, ultimately driven by the vocation to provide benefits to the society, in unconditioned and disinterested fashions.

According to Trench, two figures of scientists meet these criteria quite convincingly: the Nobel laureates Ernest Walton and William Campbell, awarded, respectively, for Physics in 1951 and for Physiology in 2015. The story is told that Walton, being asked why the press had visited his house, disarmingly answered: "Sorry, I forgot to tell you earlier: I just won the Nobel Prize", as an utter demonstration of humility and modesty. Driven by the idea of science as an activity that should be at the service of the community, Campbell persuaded the pharmaceutical company he was collaborating with to freely distribute the drugs he had contributed to discover to developing countries.

The benign representation of science has sometimes been taken to the extremes, resulting in hyperbolic and in some cases paradoxical instances in the media. Indeed, it is not infrequent to read in newspaper about a scientist described as a "superhero" and using metaphors borrowed from military jargon (i.e., "leading the charge"). A quite surprising example is represented by an article describing Fabiola Gianotti as holding the "key to the secrets of the universe" as if she was endowed with mystical power.

At a closer look, the association between modern science and supernatural spirituality could not be more troublesome, but it might be functional to the  ̶  in Trench's words ̶ "constructed for consumption" representation of scientists.
In general terms, however, people seem to adhere to this representation of scientists as benign and favorable figures. In a recent survey conducted in the US, respondents, tended to associate an array of desirable qualities to scientists. Scientists are described as intelligent (89% of the surveyed), focused on solving real-world problems (75%), skilled at working in teams (72%) and honest (71%). As a side note, it has not slipped the  ̶ amused  ̶ writer's attention that 43% of the respondents described scientists as "socially awkward". Curious, isn't it? 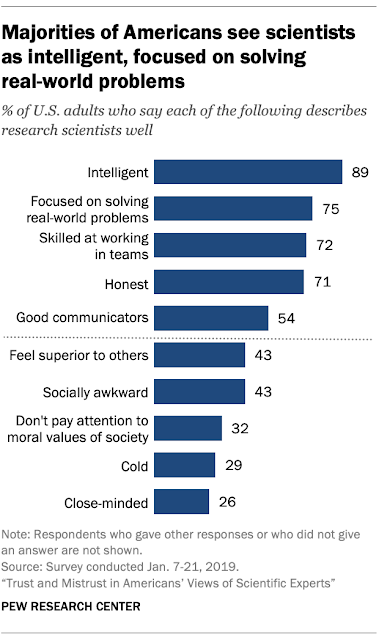 Nevertheless, history abounds of figures that are far from conveying a benign and edifying image of science. An emblematic example is represented by the once-known "pride of Korea" scientist Hwang Woo-suk who, after a stellar career as a scholar, has been found guilty of scientific fraud. Chances are that his success as a scientist will be obscured in the memory of posterity by the infamous picture of his capture, depicting him in his lab coat while being escorted by two policemen. From hero to villain in a single snapshot.

An even more famous example is possibly represented by James Watson who, along with Francis Crick, proposed the double-helical molecular structure of nucleic acids and received of the Nobel prize for Physiology in 1962. Regarded as one of the seven wonders of biological research, this discovery has received extensive appreciation and several accolades over the years. However, Watson's scientific merits have been overshadowed more than once. In addition to the controversy contemporaneous with this discovery, according to which other people involved in the investigation had been marginalized, in the last decades Watson has become target of multiple criticisms. The renowned scientist has a long history of controversial remarks, stating the superiority of certain groups of people over others, based on race, gender, religious or sexual orientation. Despite the severity of such statements, which has led a number of institutions to revoke his honorary titles, Watson's image is likely to remain mostly linked to one of the most influential discoveries of the XX century.
The examples just reported are indicative of a necessary redefinition of Mertonian norms. In a seminal paper, Ian Mitroff set a new set of norms regulating science, which takes into account science's intrinsic ambivalence.

It is a fact, however, that science continues to hold an unquestionable appeal in contemporary society. The spectrum along which this feeling expresses itself is quite wide, ranging from appreciation to deference, from admiration to mystical adhesion. While some people advocate listening to scientists, such as Greta Thunberg in her recent speech at the US Congress, others consider science as being under attack and thus deserving defense. While some see science as a source of hope, others consider it as a tool to discover the secret language of Nature (or, if you will, God). The scenario is thus complex, multifaceted, sometimes hard to decipher. Quite an ambitious challenge for the new SciComm students, don't you think?

Valeria Occelli is currently enrolled in the Master in Communication of Science and Innovation at the University of Trento. She holds a PhD in Cognitive Sciences, and has conducted research on multisensory perception and cerebral plasticity. She nurtures a keen interest in the different expressions of the written word, especially if relating to science.