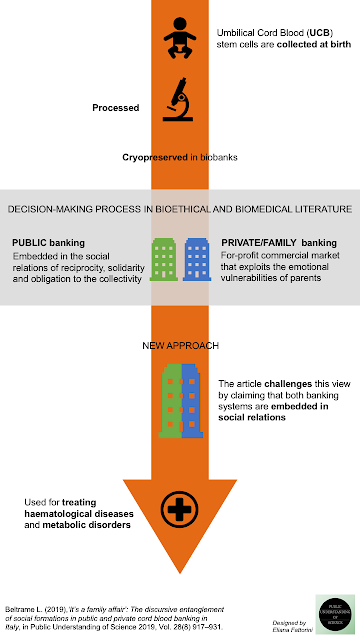 Preserving the umbilical cord blood (UCB) of a newborn child in a private biobank for possible future family uses is criticized by bioethical and biomedical literature as challenging the moral economy of donating cord blood to public banks for being used in transplantations.


How to avoid this asymmetrical distinction between embeddedness and disembeddedness?

By using the notion of entanglement developed by Michel Callon is possible to locate the circulation of cord blood, both in the circuit of donation and in those of private storage, according to how it is framed in a network of entangled elements, including different attachments to a distinct set of social relations and social formations.

Cord blood as an immunity agent and as a social gift promoting mutuality gains its biomedical and social sense only if entangled in this network of bio-social relations.
The discourse promoting private banking instead constructs the family as a biological-and-affective formation, in which family preservation is embedded in family-related responsibilities and obligations, and the family is the biological collective granting immunity to its members.


Beyond the bioethical and biomedical literature

This new approach avoids positing a clear-cut boundary. It allows exploring the decision-making processes by linking emotions and expectations of mothers and prospective parents with the entanglement of banking practices, clinical applications and biological risks, and immunity protection, through the role of discourses deployed by involved institutions in shaping frames of UCB banking, social formations and the related moral values.

Different decisions about how to bank cord blood thus diverge according to the set of social and biological relations characterizing the social formations structured by discourses.


Read the related article on Public Understanding of Science