One fifth still underplays the threat, in particular young people and those who use social media for information on the pandemic

BY Massimiano Bucchi and Barbara Saracino
More than one Italian citizen over five still underplays the Covid-19 threat. This is one of the key results emerging from the recent survey conducted by Observa Science in Society Monitor.
The monitor analyses in the first place exposure to information. The majority of Italians is getting their information on the emergency mainly through TV and radio news (52%). The second major source are websites of institutions, like the Ministry of Health and regional and local institutions (20,5%). Only a minority is gathering information mainly through social media.
Regarding precautions to avoid contagion, however, trust in official source clearly prevails: indications from national and local institutions and from one’s own GP are respectively the most and second most trustworthy source of information.

How is the work of different actors during this emergency evaluated by citizens?
The most positive judgment is for the Civil Protection Department, followed by local governments and WHO, while evaluations are less positive for the National Government and the media.

Regarding risk perception, it is perhaps surprising that a relevant proportion of the Italian public still underplays the threat: 17% think there is too much exaggeration on the dangers of Covid-19 and 13% consider it no more harmful than normal flu.
One-third of Italian citizens perceive the emergency as serious but consider sufficient some precautions to avoid contagion. Those who express more concern are divided among those who think the only solution is staying at home to reduce contagion (19,5%) and the more fatalist who see the pandemic already out of control and the impossibility for the individual to avoid contagion.

There are quite relevant differences within the population. Females more than men are convinced that one should stay at home, as well as persons aged over 60 and with a low educational level. The tendency to minimise risk is more common among 15-29yrs old and 30-44yrs old. Among 30-44yrs old, one out of three considers the current alert exaggerated, while one youth out of five considers the virus slightly more dangerous than normal flu.

With regard to regional differences, attitude towards voluntary isolation is more common in North-Western Italy and less common in the South and Islands. However, it is striking to notice that in North-East, which had several cases, more than 18% consider Covid-19 slightly more dangerous than normal flu.

The perception of coronavirus risk is also linked to the type of media exposure. Those who receive their information mostly from TV news and trust that source are more inclined to voluntary isolation. Those who use daily news (on paper or online) and trust web forums or social media contacts tend to see more often the pandemic as out of control. Those receiving information mostly through institutional websites or from their GP and relying on advice by medical doctors and chemists are more inclined to believe that appropriate precautions are enough to avoid contagion.
On the other hand, the highest percentage of those who minimise risk is among those who are not seeking information on the pandemic or are mostly seeking information through social media and mainly trust the advice from their personal contacts.

A cluster analysis can be used to summarise these attitudes in three broad types. 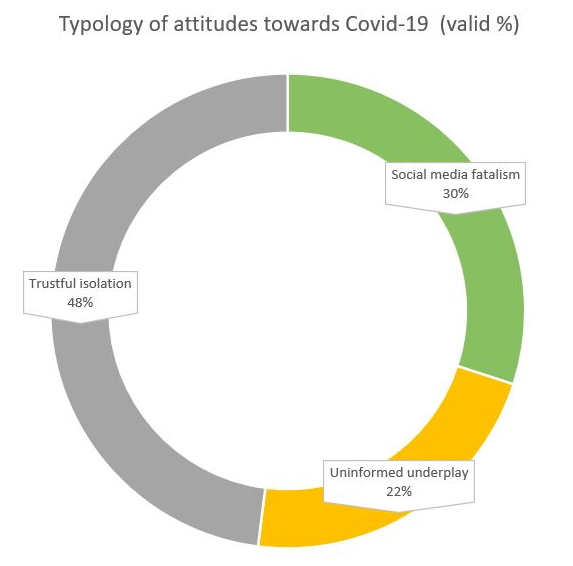 48% of Italians are oriented towards personal precautions, follow the indications of institutions and positively judge the institutions’ management of the crisis. This type is more common among females, among +60yrs old, among those with low education and low science literacy index.

30% judge the pandemic out of control, with the individual being unable to do much. For this type, social media and personal contacts are the main information source, which is also trusted for practical indications, while the evaluation of institutions’ activity is largely negative. This type is more common among males and 30-44yrs old.

22% is not seeking information, is not able to judge how well institutions are coping with the crisis, tends to underplay the level of danger. It should be of concern that this attitude is more widespread among youth.


Massimiano Bucchi is professor of Science and Technology in Society, Università di Trento, Italy.
Barbara Saracino is lecturer in Social Research Methodology, Università di Bologna, Italy.
Observa Science in Society Monitor is since 2003 a regular monitor of opinions and attitudes toward science and technology in Italy. The survey is conducted on national sample, proportional and representative by gender, age and area of residence of Italian populations aged over 15 years. 1002 subjects were interviewed between 3 and 10 march. The total of cases becomes 979 after weighing in order to make the sample structure identical to the Italian population with regard to variables gender, age and study level. CATI interviews for 30% of the sample and CAWI interviews for 70% of the sample.