Scared, Supportive and Confident in Science
(but a little confused by expert communication)
Trends and changes in the perception of the pandemic: the new data from the Science in Society Monitor

by Massimiano Bucchi and Barbara Saracino
One month after the first survey by the Science in Society Monitor, the percentage of those undermining the Covid-19 threat decreases down to 4%. The more and more widespread concern is also reflected in how interviewees perceive the reaction of the population to the crisis, characterised by “fear” for almost four out of ten and by “solidarity” for one out of four. The expectation for “phase 2” is that a mix of actions is needed, with an important role played by research. Trust in science is high, but almost half of Italians see the diversity of advice from experts as a potential source of confusion.

Regarding information about the pandemic, two-thirds of Italians (with a substantial increase in last month) mainly refer to tv and radio news. At the same time, the percentage of those drawing their information mainly from institutional web sources, like Health ministry, the Civil Protection Department, or local institutions (14,7%). The role of news media remain stable, while information from social media contacts becomes even less important than a month ago. 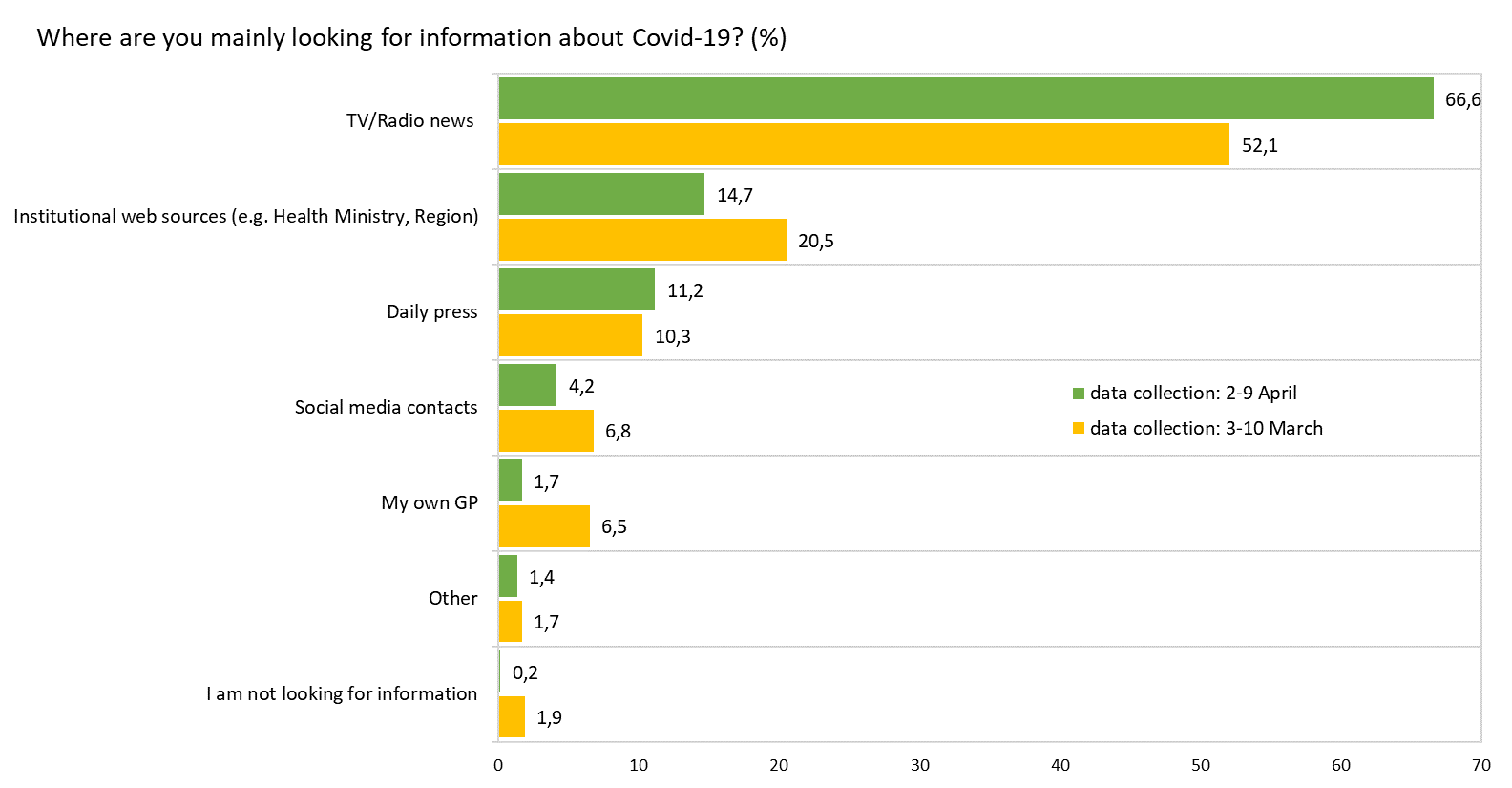 Regarding precautions to avoid contagion, trust in national and local institutions becomes stronger, as well as (to a lesser extent) reference to tv/radio (where in the last month information campaigns have multiplied). The role of indications from one’s own GP decreases remarkably, but it can be hypothesised that the development itself of the crisis has made more difficult to access this source. 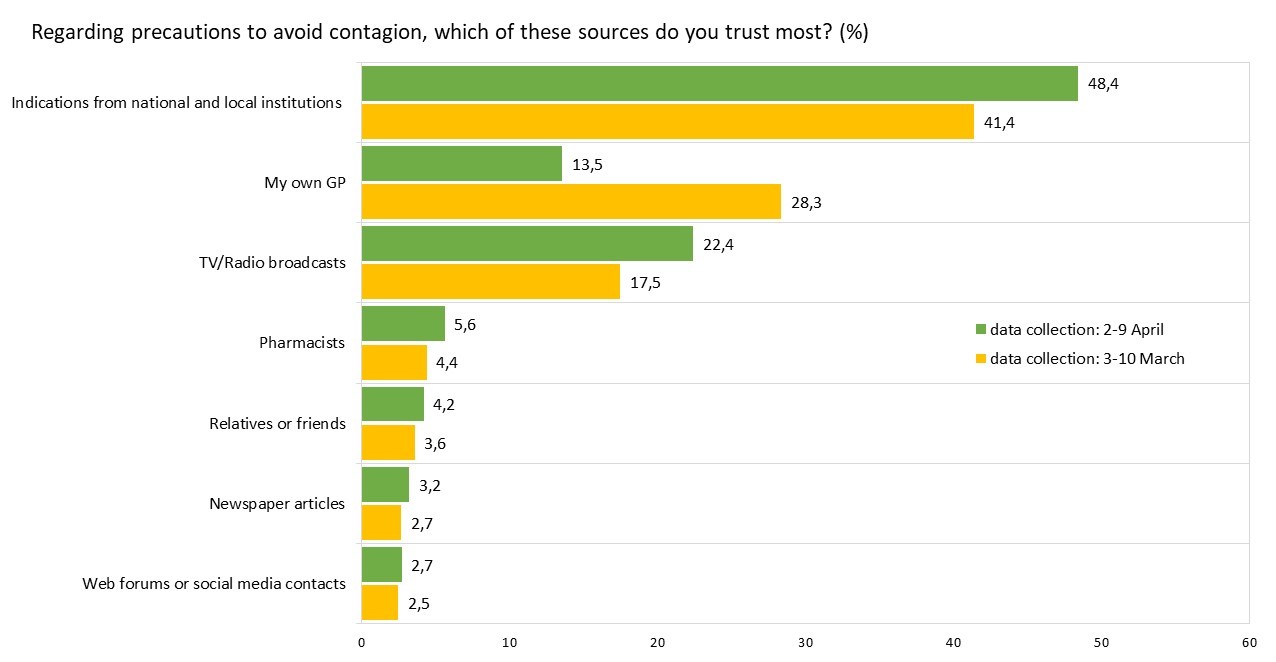 Evaluation of the crisis management and communication by institutions

How is the work of different actors during this emergency evaluated by citizens? A month ago, the most positive judgment was for the Civil Protection Department, which becomes even more positive (almost nine citizens out of ten express a positive evaluation of its actions). Consensus is on the increase also for municipalities and regions of residence, as well as for the National Government, whose management is positively appreciated by two-thirds of citizens. Evaluations become more positive also for the information media, while remain stable those regarding WHO. Two-thirds of Italians judge negatively the European Union actions in this pandemic.
There are interesting regional variations. Management of the crisis by the National Government is judged more positively in the Southern Italy and more negative in Northern Italy; vice versa, positive evaluations of management by regions and municipalities reach a peak in the  North-East (87% judge positively the actions by regions and 82% those of municipalities), while negative evaluations reach a peak in the South. 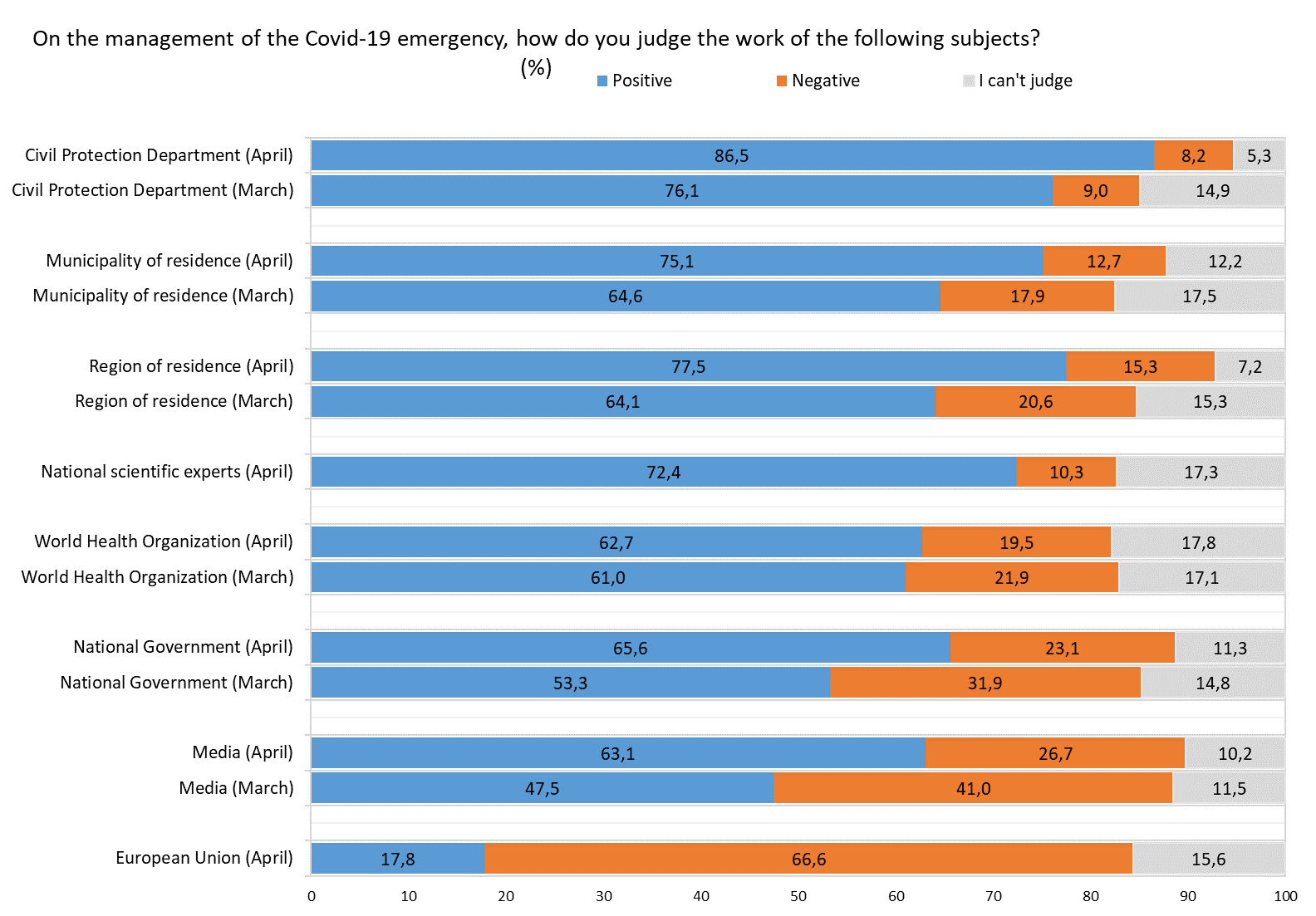 Less positive is the evaluation of communication actions in the emergency. Almost half of Italians rate communication by the National Government “barely sufficient”, and 17% rate it as “poor”. Communication efforts by municipalities and by the WHO are judged not so clear and effective, while those by the National Institutes of Health and by the Civil Protection Department are rated more positively. 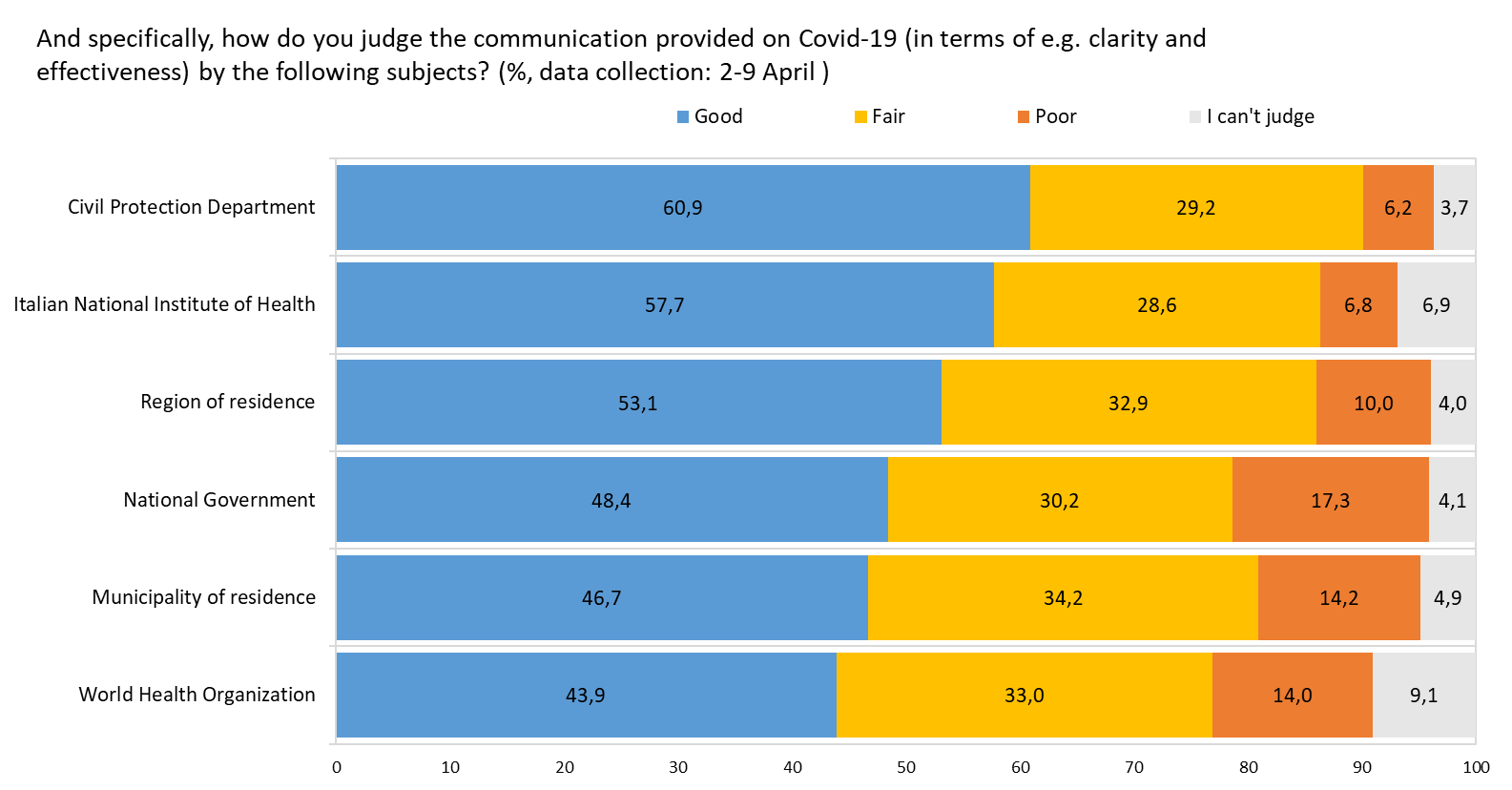 The role of scientific experts

Data gathered in April allow analysing more in depth the role of scientific experts. Public opinion is sharply divided on their communication efforts. Almost half of citizens, in fact, think that the diversity of advice publicly given by experts has created confusion (48%); in addition, another 8% recognises their substantial competence, but negatively evaluates their communicative abilities. For another 11%, in order to avoid confusion, it would be better that experts provide their advice form to institutions in confidential form. One third of citizens evaluates experts’ communication very positively. 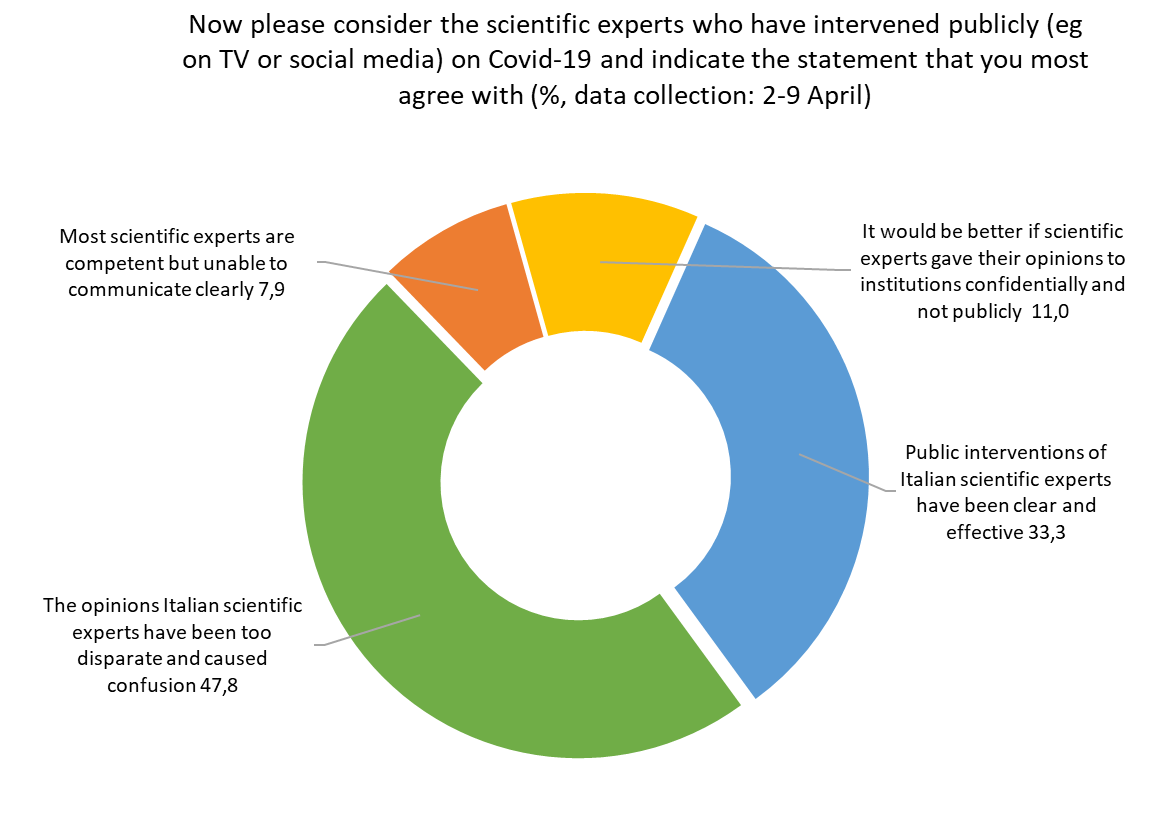 The most significant changes compared to March can be observed in the perception of risks connected with Coronavirus. The percentage of those who think that the only option is staying at home to reduce contagion risks; at the same time, the perception of those undermining the threat (almost one-fifth in early March) has substantially disappeared. Stable the more fatalist attitude seeing the pandemic out of control (14%) and the impossibility for the individual to avoid contagion (6%).
This sharp increase in public concern is also reflected in how interviewees perceive the population reaction to this crisis, characterised by fear for almost four Italians out of ten. However, it should not be neglected that more than one-fourth indicate solidarity as the dominant response by the population. 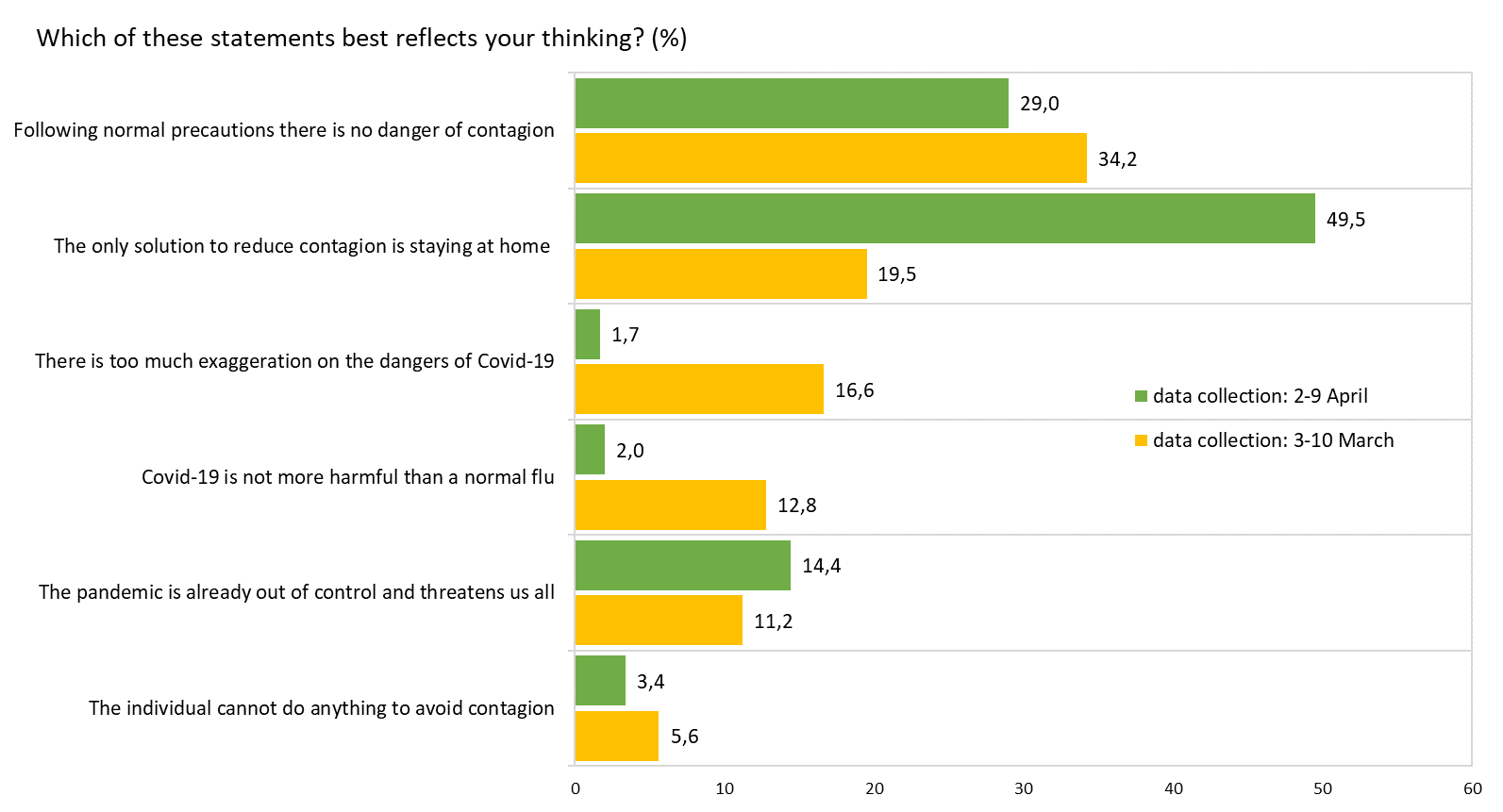 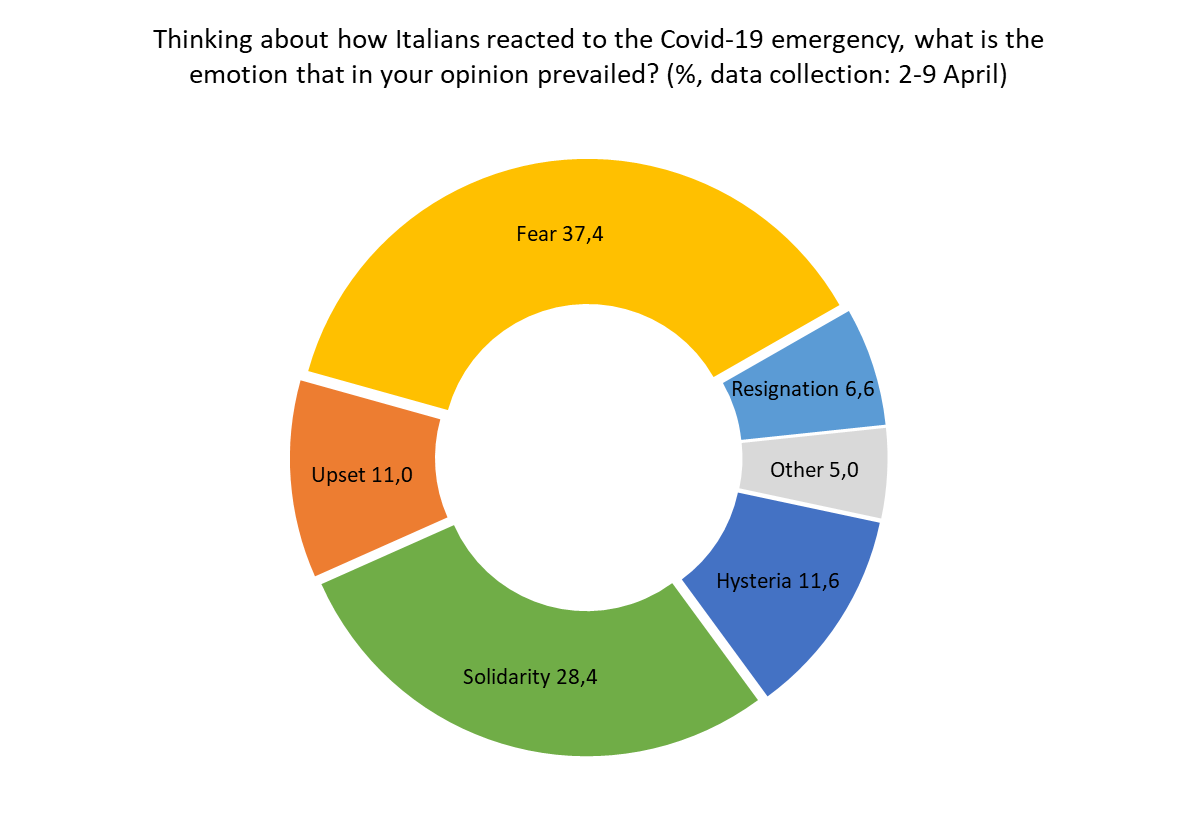 “Phase 2” and the role of research

What are the attitudes and expectations in view of the so-called “phase 2”, e.g. the management of the post-lockdown? The most widespread response outlines a mix of actions (social distancing, funding of research for possible therapies and vaccines, financial support to businesses and citizens, stronger health structures), although more relevance seems to be given social distancing and research.
Expectations towards research and towards researchers are thus quite strong, although blended with the awareness that results and their validation will not be quick: 74% expect results only in the long run. 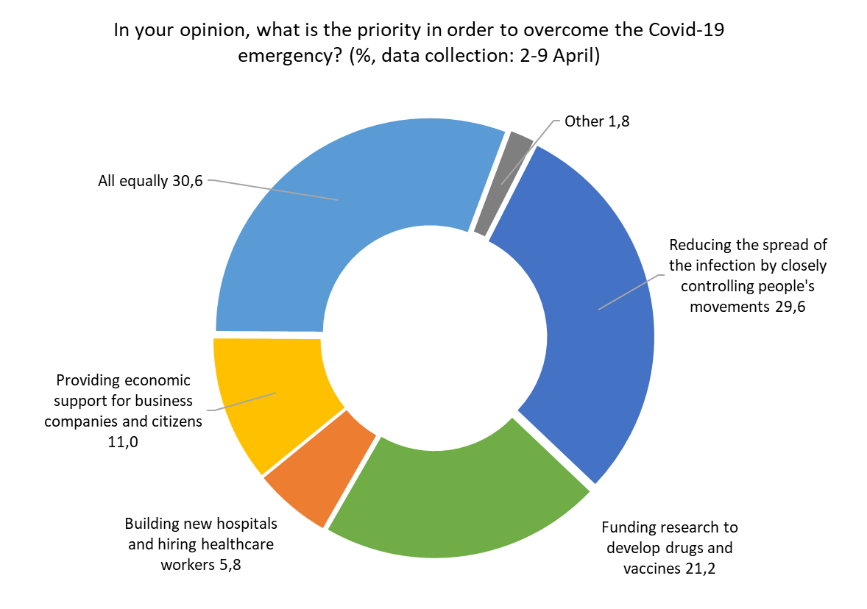 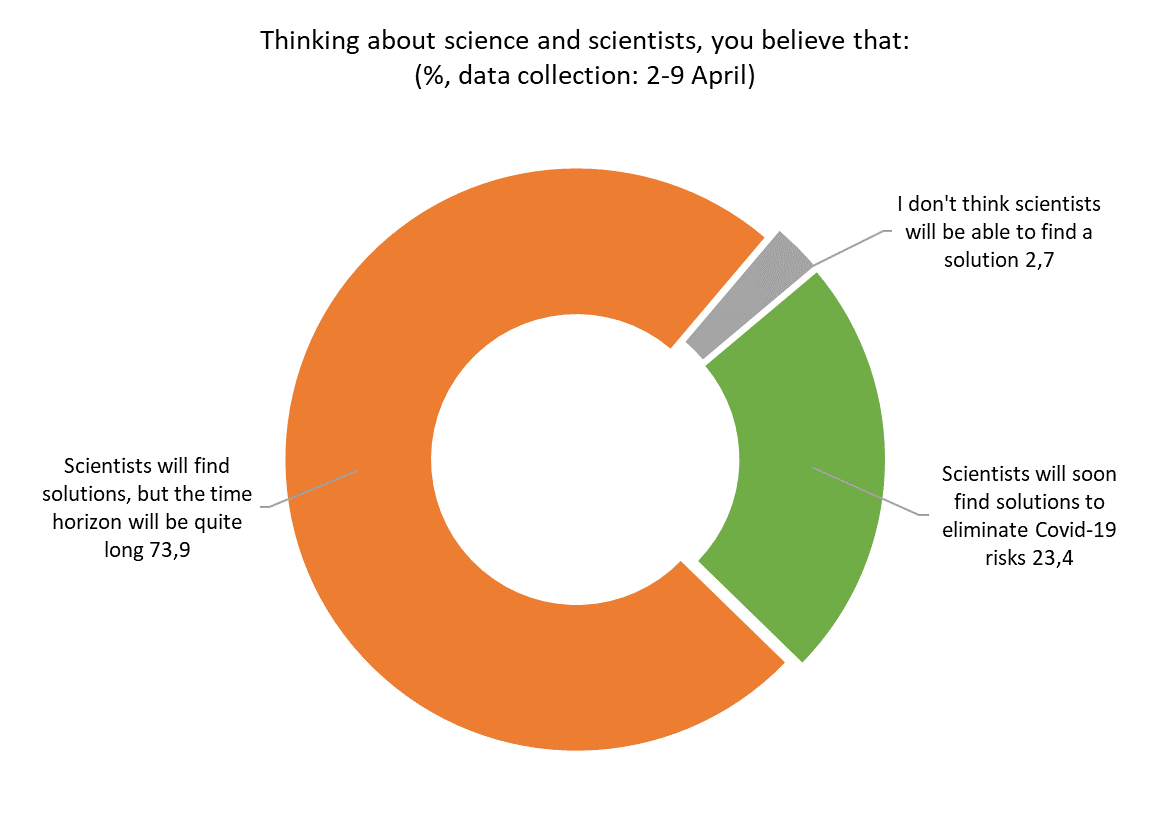 In general, what are the expectations towards time required to exit from the pandemic? Between 3 and 5 months for four Italians out of ten, that extend to a year for another 30%. Much smaller the percentage of those who are more optimistic (between 1 and 2 months, 14%), but also of those who are more pessimistic (more than a year, 16,5%).

A cluster analysis on data gathered in April can be used to summarise the relationship of Italian citizens with information, their trust in sources, their evaluation of institutional management of the crisis and their perception of the role of science and scientific experts.
43% of citizens fall within the optimistic institutional type: they gather their information mainly from tv news, institutional web channels and their GP. They judge positively both the actions and the communication from institutions and the communicative role of scientific experts; they believe that science will provide effective solutions in the short term.
35% seem to be largely disoriented: they base their own behaviour during the crisis on a mix of information sources (news media, relatives and friends) but cannot evaluate neither the management, nor the quality of communication by institutions. Multiplying expert advice given in public is for them a source of confusion; they are not sceptic on the perspectives offered by research, but have no expectations in the short-term.
Finally, 22% can be described as social media pessimistic: their evaluations are mostly negative both of the management of the crisis and communication by institutions. For this type, social media and friends/relatives are the key information source, which they rely upon also for indications on how to reduce the risk of contagion. This type is also critical of the ability of experts to communicate clearly, as well as of the possibility that science may provide (also in the long-term) responses to the pandemic crisis.
Massimiano Bucchi is professor of Science and Technology in Society, Università di Trento, Italy.
Barbara Saracino is assistant professor in Social Research Methodology, Università di Bologna, Italy.
Observa Science in Society Monitor is since 2003 a regular monitor of opinions and attitudes toward science and technology in Italy. The survey is conducted on national sample, proportional and representative by gender, age and area of residence of Italian populations aged over 15 years. 1002 subjects were interviewed between 3 and 10 march. Total cases became 979 after weighing in order to make the sample structure identical to the Italian population with regard to variables gender, age and study level. The second survey was conducted between 2 and 9 April interviewing 1048 subjects (1029 after weighing). CATI interviews for 30% of the sample and CAWI interviews for 70% of the sample. 845 subjects responded to both the first and second surveys.
--