“The people have had enough of experts!” How to understand populist challenges to science

June 10, 2020
By Niels G. Mede
Populists around the globe accuse political elites of ignoring the will of ‘the common people’. Oftentimes, however, they also bash academic elites – scientists, experts, and other epistemic authorities – for producing knowledge that is allegedly out of touch and useless, does not suit practical needs, and may contradict what ‘ordinary folks’ think. Such views have been echoed by politicians, businessmen, and celebrities. In a recent theory paper, Mike S. Schäfer and I conceptualize them as “science-related populism”. 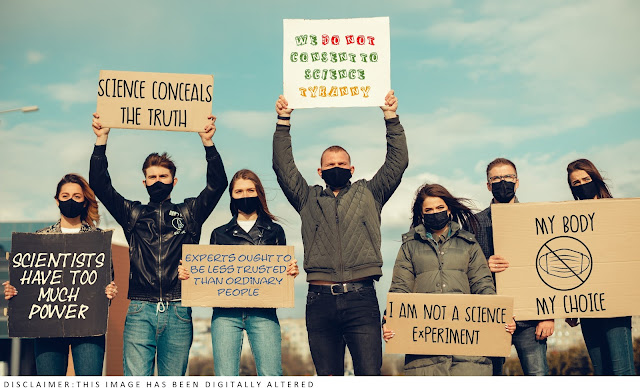 Presidents have claimed to have a “natural instinct for science” (Donald Trump)1 and demanded that science must “generate immediate return to the taxpayer” (Jair Bolsonaro)2. Media celebrities and business leaders have slurred science as the “big brain league” (Milo Yiannopoulos) 3 and praised common sense as an “incredible indictment of our elites” (Peter Thiel)4. In 2016, opinion polls 5 showed that 44% of Americans think that “experts ought to be less trusted than ordinary people”. And in 2020, epidemiologists and virologists found themselves being challenged by world leaders’ gut feelings 6 about how to deal with the COVID-19 pandemic. Science has faced many attacks in recent months and years – whether for hotly debated issues like climate change and vaccination or for less politicized topics like nutrition or Steiner education.
This trend has been investigated in several ways: First, in scholarly and journalistic essays which see it as a symptom of “a new anti-knowledge, anti-science era”7. Second, in empirical research examining the mechanisms of science denial8 or conspiracy theories9. A third approach to scrutinize current anti-scientific criticisms of public figures and lay audiences is a theoretical one: The development of a conceptual understanding of what is going on. In a recent article, we have followed this approach and devised a theoretical framework which aims to describe such criticisms as science-related populism.

After all, the above-mentioned criticisms contain two of populism’s core features: They are anti-elitist, portraying science and scientists as a seemingly bad elite, and they valorise the ‘ordinary people’, cherishing their alleged needs and virtues. In populist thinking this sets up a fundamental cleavage: a perceived conflict between criticised elites and celebrated ‘common people’.
But science-related populism is more than that. The toolbox of populism scholarship, which is usually concerned with political populism, cannot fully grasp populism’s controversial relationship with science. This is because science differs from politics, as it primarily operates with knowledge claims and less with political power claims.
Our concept of science-related populism tries to capture this, and therefore models the underlying conflict between ‘the people’ and ‘the elite’ differently than previous populism theories. A key characteristic of science-related populism is a perceived conflict between ‘ordinary people’ and ‘academic elites’, where the people are seen as virtuous because they allegedly derive their knowledge from common sense, and where the academic elite is portrayed as a “group of good-for-nothing layabouts” who produce allegedly useless studies in the proverbial ivory tower. Science-related populism argues that this conflict exists because academic elites disregard the people in two ways: They illegitimately decide upon research topics, research aims or research methods, and they illegitimately try to determine what is ‘true’ in society – while it should really be the people themselves who take these decisions and define the ‘truth’.

Trump’s, Bolsonaro’s, and Thiel’s anti-scientific sentiments fit well into this framework: Claiming a natural instinct for science can be interpreted as an emphasis of people’s virtuousness, and describing scientists as a big brain league characterizes them as a haughty elite. Calls for immediate return to the taxpayer reflect the demand that ‘ordinary people’ should have a say in science-related decision-making, and portrayals of common sense as an incredible indictment of elites suggest that the people’s epistemology should be considered true knowledge.
Conceptualizing science-related populism like that may help social science to better capture the status and dynamics of contemporary science-society relations. The concept brings together recent debates that have sometimes been operating with catchy yet opaque labels like “post-truth” 10 or “anti-science”11. And it integrates existing empirical studies of anti-academic discourse – which have used different conceptual umbrellas so far.
A third merit of the concept of science-related populism is that it can guide further research. Prior research has already provided evidence on single facets of science-related populism, showing that certain people describe climate research as “mob science” that conceals the ‘truth’12 or believe scientists have a power that makes them dangerous13. Yet comprehensive investigations will be necessary to obtain a thorough understanding of which, how, and why people endorse or communicate science-related populism.
Author biography:
Niels G. Mede is a Research and Teaching Assistant at the Department of Communication and Media Research of the University of Zurich. In his research, he focuses on science communication, attitudes towards science and research, populism, and survey research methods.
Twitter: @nielsmede
References:
(1)  AP’s interview with President Trump
(2) Brazilian universities fear Bolsonaro plan to eliminate humanities and slash public education budgets
(3) Scientists Who Are Actually Really Stupid: #1, Neil deGrasse Tyson
(4) Hypnotic Mass Phenomena
(5) The Dynamics and Political Implications of Anti-Intellectualism in the United States
(6) Public health experts are now the bad guys
(7) Trump’s skepticism about climate change is turning scientists into activists
(8) Organized Climate Change Denial
(9) Routledge Handbook of Conspiracy Theories
(10) Post-truth politics and why the antidote isn’t simply ‘fact-checking’ and truth
(11) Who Are You Calling Anti-Science?
(12) Trust/distrust judgments and perceptions of climate science: A research note on skeptics’ rationalizations
(13) Science and technology report (PDF - 163 pages)