IN ADDITION TO VACCINE, TRUST WILL BE NEEDED

The start of the pandemic crisis at the end of the winter had revealed, in Italy as in other countries, the weakness of stereotypes that describe the general public as an easy prey of unreliable information sources and content. According to data from the Science and Technology in Society Monitor, in fact, Italian citizens mostly relied upon (and considered trustworthy) institutional sources of information on the pandemic and how to avoid contagion. Evaluations of the management of the crisis by national and local institutions were also largely positive, with peaks of appreciation beyond 85% for the Civil Protection Department and 65% for the National Government (similar trends were recorded internationally).
More than six months later, in the midst of the so-called “second wave”, the picture has profoundly changed. Citizens’ positive evaluation of how the Civil Protection Department is handling the crisis, for example, has decreased by 18% compared to April; for the National Government, positive evaluations have decreased by 16%; for the regional governments, by 21%. Almost 30% of Italians now evaluate the decisions and measures by their own regions to fight the pandemic negatively. Negative evaluations have also increased for WHO and news media. The most negative data concern the evaluation of the role of scientific experts, down by 23% and now negative for one-fourth of citizens. 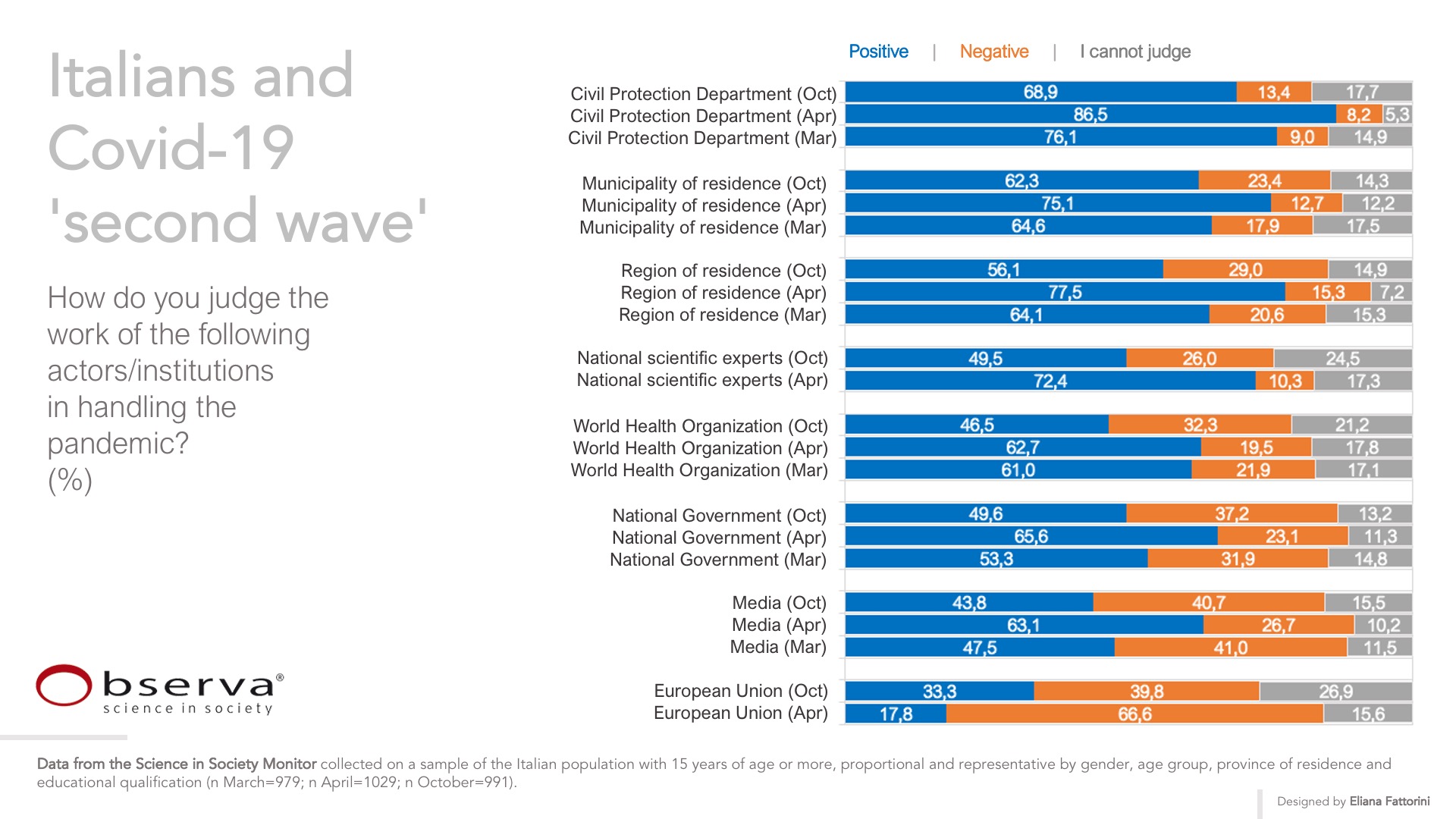 The perception that numerous public statements by experts have created confusion, already present in April, is now even more widespread (62%). 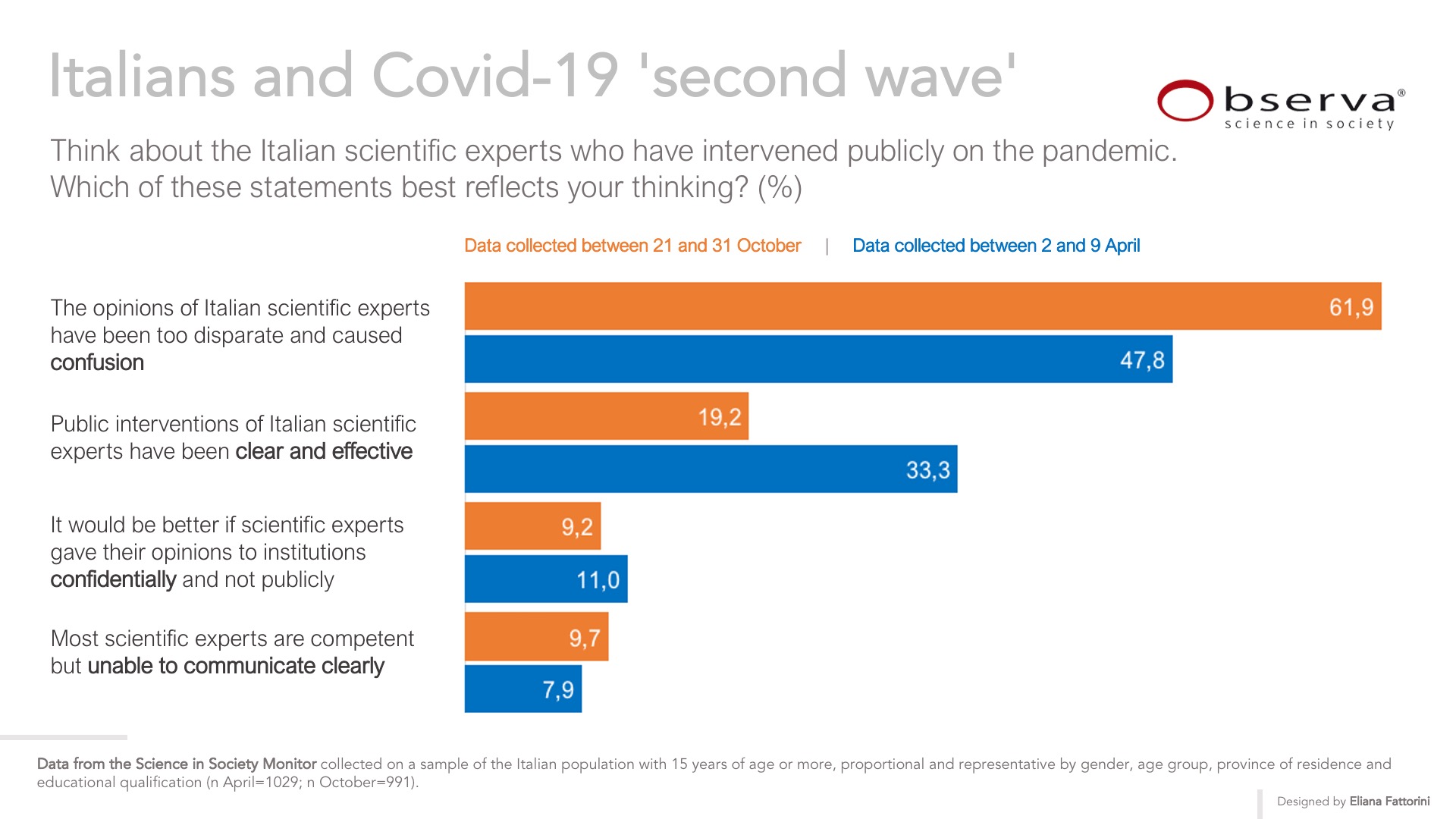 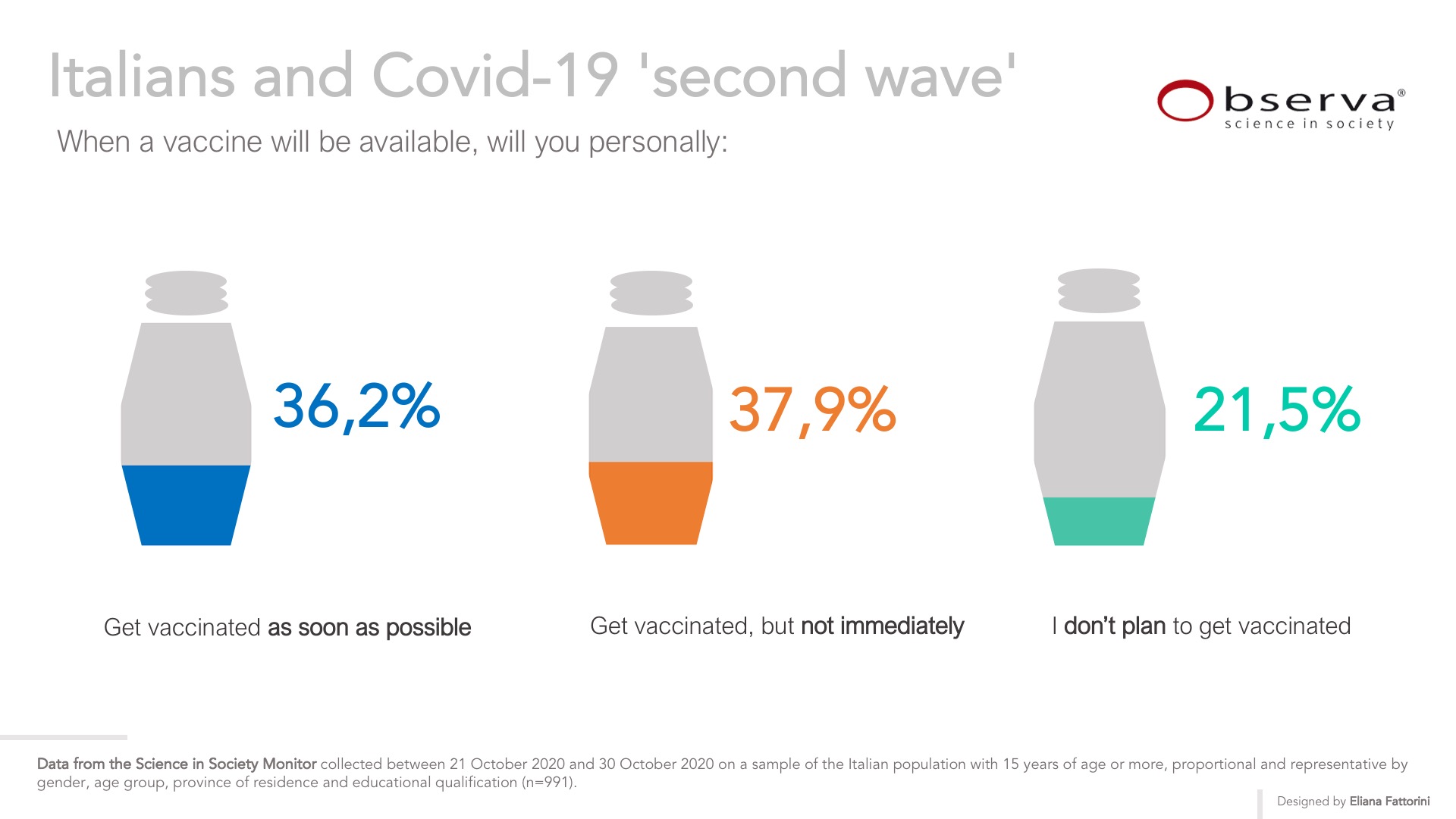 These attitudes are not the expression of a generic scepticism toward science, nor towards vaccination in general (in Italy only 4% of citizens firmly oppose vaccination) and not even of a so-called “negationist” approach towards the gravity of the pandemic threat (which characterises 6,5% of public opinion). 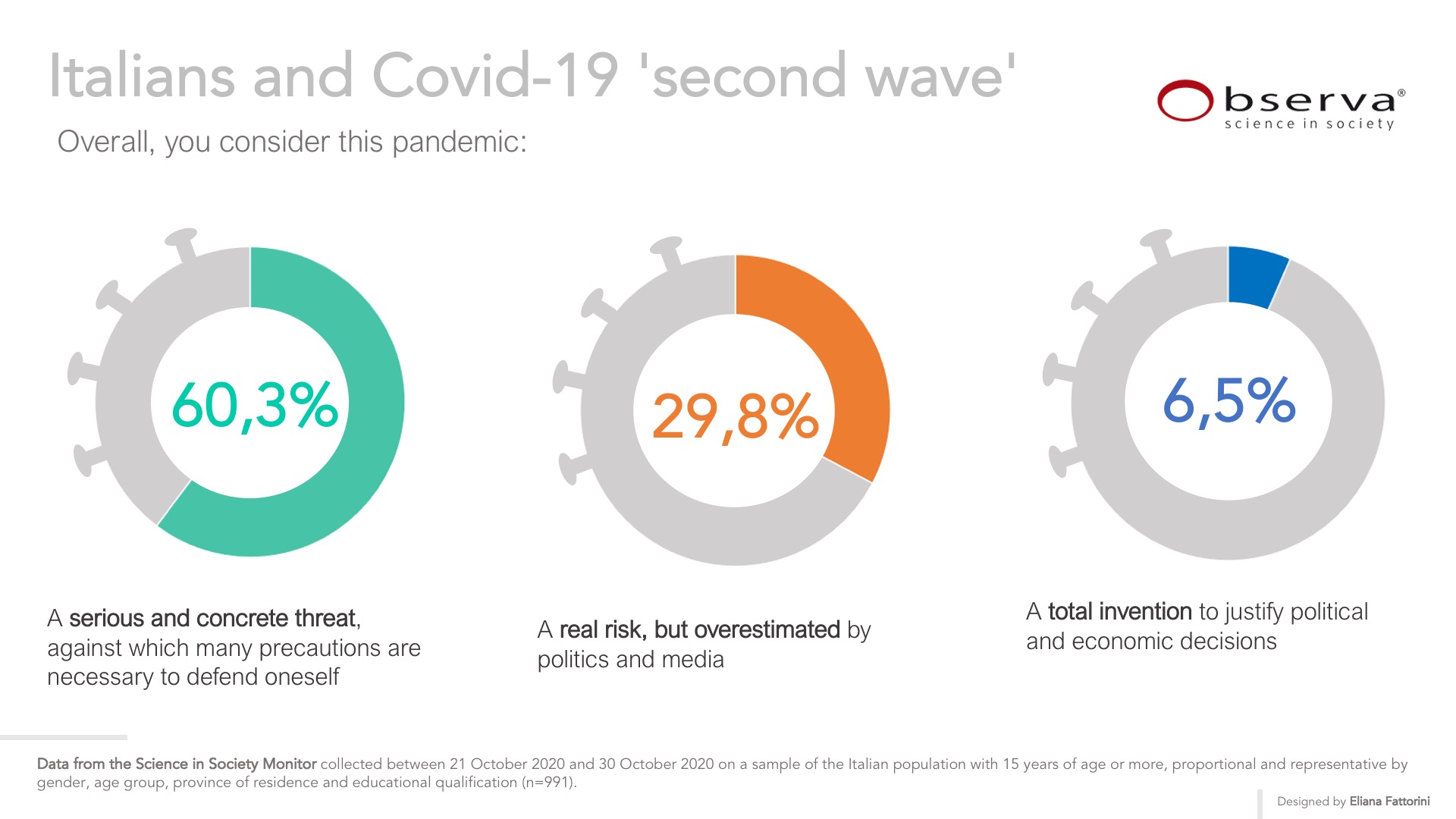 The central theme is actually trust in institutions and in the operational capacity of key actors and institutions. This has also been observed in connection with the difficulties related to the adoption of the App for tracing contacts: it is not possible for institutions to shift suddenly from distrusting citizens and blaming them for irresponsible behaviour to expecting trustful collaboration from them – moreover in a situation in which one may have to wait several days for a test.
Institutions and scientific experts had accumulated, between March and April, a significant trust capital. Unfortunately, during the last months, this capital has been partly dilapidated, in part overwhelmed by the strength of the second wave. It is necessary to rebuild, as soon as possible, a trustful relationship among institutions, experts and citizens. Otherwise, even vaccines, when available, will not be sufficient to get us out of this crisis.

Massimiano Bucchi is professor of Science and Technology in Society and Director of Master SCICOMM, Università di Trento, Italy.
Eliana Fattorini is a Ph.D. student, School of Social Sciences, Università di Trento, Italy.
Barbara Saracino is assistant professor in Social Research Methodology, Università di Bologna, Italy.
Observa Science in Society Monitor is since 2003 a regular monitor of opinions and attitudes toward science and technology in Italy. The survey is conducted on a national sample, proportional and representative by gender, age and area of residence of Italian populations aged over 15 years. CATI interviews for 30% of the sample and CAWI interviews for 70% of the sample. The first survey was conducted between 3 and 10 march 2020 interviewing 1002 subjects; total cases became 979 after weighing in order to make the sample structure identical to the Italian population with regard to the variables gender, age and study level. The second survey was conducted between 2 and 9 April interviewing 1048 subjects (1029 after weighing). The third survey was conducted between 21 and 30 October interviewing 1001 subjects (991 after weighing).