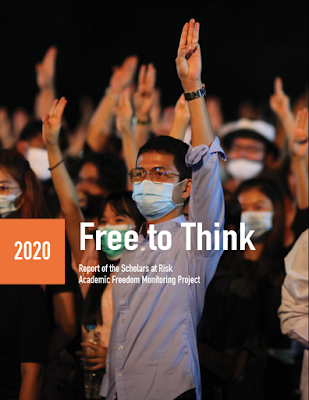 According to the recent report Free to think by Scholars at Risk, published in late November 2020, “(a)ttacks on scholars, students, staff, and their institutions occur with alarming frequency. Around the world,  state and non-state actors, including armed militants and extremist groups, police and military forces, government authorities, off-campus groups, and even members of higher education communities, among others, carry these attacks.”  In many countries, pressures on academic communities around the world have increased as a result of the COVID-19 pandemic.

Scholars at Risk lists only the most severe violations against scientists and experts, such as killings, disappearances and violence, arrests and wrongful imprisonment or travel restrictions. Most of these cases are reported from Asia and Africa, but violations against academic freedom are not just a problem for dictatorial states. The rise of right-wing populist parties and leaders as well as the changes in media landscape have also fuelled the phenomenon throughout the world, including Europe, North America and South America.

In France, debates on academic freedom sparked recently in the aftermath of the assassination of history professor Samuel Paty on October 16. Education minister Jean-Michel Blanquer accused “Islamo-leftism” at the French Universities for spreading separatist and anti-republican ideology. Soon after, at the end of October, French Senate voted on to approve an amendment to the Research Programming Law, which aligned that academic freedom should be exercised within the limits of “the values of the Republic”. This caused furore in French Academia.

The rise of authoritarian populism

Some of the recent threats to academic freedom are connected to the rise of authoritarian populist parties and leaders all over the world. Science-related populism presents scientists and experts as an “academic elite” detached from “the people”.  This criticism against academics and violations against academic freedom has been promoted by populist leaders such as Victor Orban, Donald Trump and Jair Bolsonaro.

In Europe, researchers have had difficulties in the last ten years, especially in Hungary but occasionally also in other Central Eastern European countries. In Hungary, the CEU Central European University has become a symbol of scientific freedom. The George Soros-funded university in Budapest has long been the eyeball of Prime Minister Viktor Orbán. In 2017, a new university law came into force in Hungary, specifically against the Central European University. Since then, the university has tried to negotiate its position, but its operating conditions have further deteriorated. In December 2018, the university decided to hand over and transfer its degree-leading education to Vienna, Austria.

Czech President Miloš Zeman has used his power to block the appointment of professors. In many cases, the reasons have been seen as political. The Czech president has the power to confirm the appointments of professors, but in the past, presidents have not used their power to block appointments. The largest university in the Czech Republic, the internationally acclaimed Charles University, sued the president for abuse of power and violation of academic freedom. The council of rectors of the country has also supported the university in this matter.

We have proposed an analytical framework for the various forms of suppression that scientists endure, especially in their roles as experts in the public arena. We make a distinction between different forms of hidden suppression, such as political and economic control, organizational control and control from the public.

Economic and political control of research manifests in several ways, which in turn affect how these issues limit researchers’ freedoms of inquiry and expression. Sometimes politicians of government officials scrutinize and attempt to adjust the public spread of research data and results so that they can fulfil predetermined policy goals. Research and expert commentaries which question government policies are not tolerated.

In general, political and economic control is about increasing instrumentalization of science. Research funding becomes subordinated to “strategic” goals such as innovating and solving various economic and social problems. In many countries, market-driven elements have been implemented in universities and higher education institutions. For instance, in France, the recent research legislation supporting neo-liberal tendencies was named as “a Darwinian law” by the critics.

Similar worries were present during the Trump administration in the U.S. For instance, The Sabine Center for Climate Change Law at Columbia University established a website called the Silencing Science Tracker that “ tracks government attempts to restrict or prohibit scientific research, education or discussion, or the publication or use of scientific information”. The website contains data on government censorship, the self-censorship of scientists, research cuts, restricted publications and the misrepresentation or disregard of scientific research in policymaking.

With the rise of social media, we have witnessed a partly novel phenomenon – namely, aggressive feedback from the general public and lay communities that is aimed at scientists. This is happening in areas such as climate change research and vaccinations. Further, in the humanities and social sciences, researchers of racism, multiculturalism and immigration often receive aggressive public criticism. Attacks and threats against researchers acting in public arenas are often promoted by the right-wing populist movements and parties, who consider academics representing the “academic elite” or  “corrupt insiders-club”.

In Finland, this kind of public harassment and hate mail, even death threats against academics making commentaries in public arenas became a major issue in the late 2010s. The Committee for Public Information in Finland, which worked under the Ministry of Education, decided to survey researchers for their feedback about their public roles as experts. The first survey was conducted as an online survey in 2015 and was repeated in 2017 and 2019.

Sometimes this aggressive feedback that appeared to come from ordinary citizens or anonymous writers was actually originated from partially crowd-sourced campaigns against individual researchers. Some activist groups even made unfounded scientific misconduct claims in order to silence “difficult” researchers. As a practice, this reflects how the legitimate tools of regulation within science have become weaponized. This activity was often connected to the supporters and leaders of the right-wing populist Finns Party, which had become the second most popular party in Finland.

This kind of activity can also be used to influence public debate about certain topics, such as immigration, multiculturalism, or sex and gender. Further, it has been noted that female researchers acting in public receive gender harassment, which aims to limit their role in communicating research. Also, our study showed, that particularly female researchers who dealt with politically sensitive topics seemed to confront aggressive and sexually motivated commentary in their public appearances. Many researchers also saw this as a source of self-censorship.